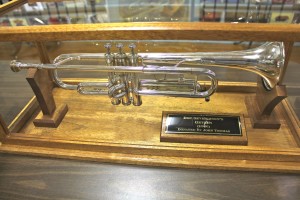 In 1966 the Paschal High School stage band went to the National Championship contest in Pampa, Tx. where Doc Severinsen was one of the judges.  Doc was so impressed with the playing of lead trumpet, 15 year old John Thomas, he decided to give John his trumpet.  Doc was a Getzen clinician at the time.

in 2011, John donated this trumpet to our jazz museum in Sherman during John’s trumpet clinic at the museum.  It’s a great example of what Doc was playing in 1966.  Thanks to John for the donation and for being such a good friend through the years.

“Meloncholy Baby”–Doc Severinsen playing at Ridglea Country Club in Fort Worth, TX. circa 1970